A downloadable game for Windows and Android

We made an indie game called "Sunshine" at the Art Games Game Jam in South Korea.

Its sub title is "Art,Politics, and Digital Games", and its topic was "Utopia". Our team members shared ideas to combine those issues.

So, here's the result.

You are the "Sun", and you develope your own utopia.

Use arrow key to move the sun clockk or anti-clock wise.

You can also use Xbox 360 or Xbox One controller with left and right trigger and A button to zoom.

Shine extra energy to people to turn them to love you.

Shining will cost energy and more things you shine faster the energy drain.

Loved people will spwan a positive enegy back to you so you can replinish your energy!

Buildings will keep the people alive longer without sun's energy, but beware when you are on low energy as they won't die easily and it will be difficult to get the energy back.

Keep them alive and grow its population to "win"

and EVERY TEAM MEMBERS! XD

Update : Added a space whale that was cut off due to time limit during the jam session. 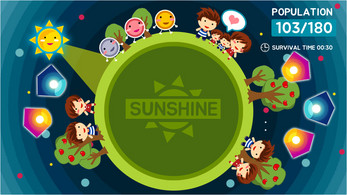 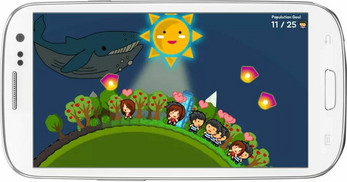